As the general studies principal at Emek Hebrew Academy, Michelle Andron has a broad mandate. She oversees the entire general studies program for kindergarten through eighth grade, including hiring and supervising educators, scheduling, admissions, accreditation, professional development, parent communications, and accommodating students with special needs. But curriculum has been a particular focus for Mrs. Andron. Since joining Emek as curriculum coordinator in 2010, she has worked to create a cohesive scope and sequence for Emek's general studies curriculum, building consistency through the grades so students leave better prepared for high school and beyond.

Though she had worked with younger children as a tutor and counselor, Mrs. Andron entered college planning a career in medicine. An advisor told her she should major in something other than biology to stand out in the medical school application process; she chose education. Her courses and field work hooked her on teaching. During her first teaching job at Sinai Akiba, her mentor Shelley Lawrence (a 2009 Jewish Educator Award recipient) "told me I was born to be a teacher," says Mrs. Andron. "I knew I had made the right choice." At Emek, Mrs. Andron has implemented many new programs over the years, including Responsive Classroom, reading and writing workshops, Singapore Math, a middle school humanities program integrating social studies and language arts, teacher rounds for peer observation and feedback, and parent nights focused on math, science and Jewish learning. "Since my first day of teaching I have tried to instill in my students the idea that everyone is different and has different gifts," says Mrs. Andron. "We all need different things to be able to learn and grow. As educators, our goal is to give each individual student what they need to be able to unlock their individual gifts and reach their highest potential."
Note: This biography was current at the time this educator received the Award 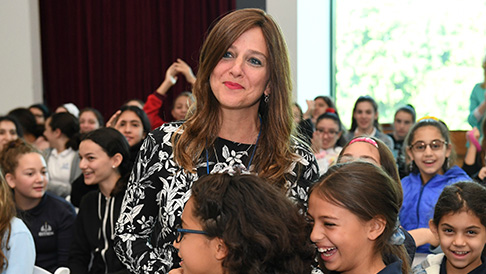